Why did is Bitcoin dropping? Let’s take a look at a few possible causes of today’s sudden plunge and look at the charts to evaluate the next possible move.

The moment many traders have anxiously anticipated arrived this morning as Bitcoin price (BTC) plunged below $7,800 and eventually settled near $7,400. It’s possible that the bleeding isn’t over yet and investors will likely wait for the 4-hour and daily close before making any strong moves.

Many traders anticipated a decisive move occurring sooner than later simply based on the fact that Bitcoin has been bouncing around in the $7,800 to $8,300 range since Sept. 26 and the digital asset’s consistent failure to sustain above $8,200 to $8,300 suggested that momentum was waning.

Since dropping from $9,500 on Sept. 24, Bitcoin has dropped below $7,800 on eight separate occasions and today’s price dump is the ninth. So from a technical point of view, Bitcoin was already biased towards bears on the short-term timeframe and this bias has also steadily increased on the longer time frames.

Today’s price dump liquidated $200 million worth of leveraged longs at BitMEX. According to twitter analyst “taiwandan” the Bitcoin liquidation at BitMEX could have begun with a 3,600 BTC sale at Bitstamp. Taiwandan said that “every bid from $7,800 to $6,200 wiped out in less than 15 minutes.” 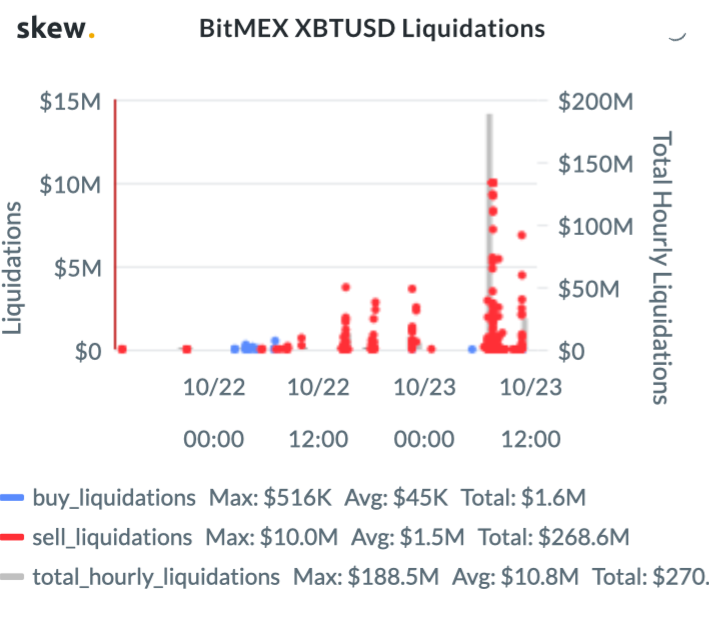 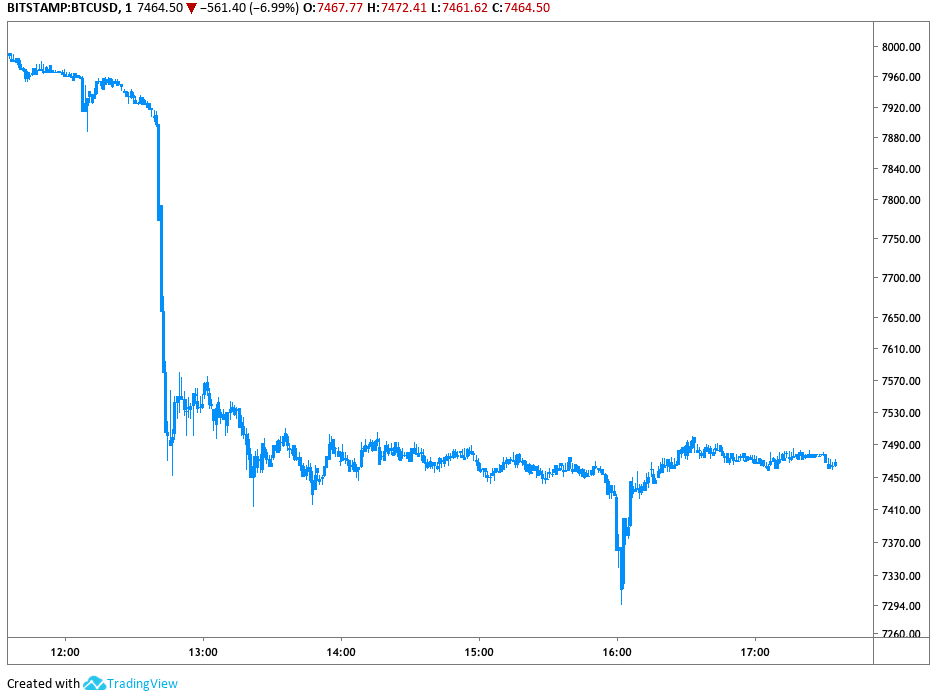 Interestingly, data from Skew also showed that open interest was coming close to a multi-month high of 110,000 BTC ($900 million) and this figure peaked one hour before the dump occurred. 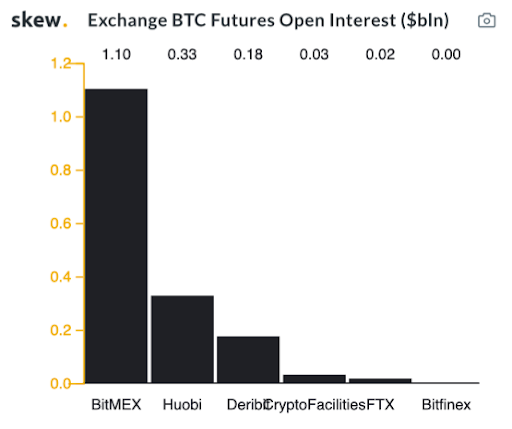 Similar to traditional markets, the crypto sector is heavily influenced by media and it’s possible that recent news might have exacerbated the shock to Bitcoin’s price.

Today, Facebook CEO Mark Zuckerberg is testifying before U.S. lawmakers about the Libra project, political ads, and the proliferation of fake news on the platform. It seems every time the U.S. Congress discusses cryptocurrency, Bitcoin’s price drops.

Adding to the fear, on Oct. 22, U.S. congresswoman Sylvia Garcia presented a draft bill proposing that all stablecoin be categorized as securities. If passed into law, all stablecoins and their issuers would fall under the jurisdiction of the U.S. Securities and Exchange Commission.

Additional news that could be impacting Bitcoin’s price is Google’s announcement that a quantum computing breakthrough has enabled one of its machines to carry out tasks that would take a supercomputer 10,000 years to execute.

Quantum computers solving complex algorithms seem to make investors nervous that the Bitcoin network is under threat and it’s possible that some crypto investors jumped ship as the story circulated through the New York Times, Bloomberg and crypto media.

Clearly, a lot is happening during a short time span and this is weighing on Bitcoin’s price. Let’s take a brief look at the charts to see what might happen next.

Bitcoin formed a double top at $8,312 and this was a sign that a reversal was on the cards. Previously, bulls defended $7,800 and buyers consistently stepped in to prevent the price from dipping below this point.

But today’s sell-off broke through the $7,800 and $7,500 support. The 111 Daily Moving Average (DMA) still appears en route to cross below the 128 DMA and today’s downside break pulled the price far below the 20-MA of the Bollinger Band indicator. 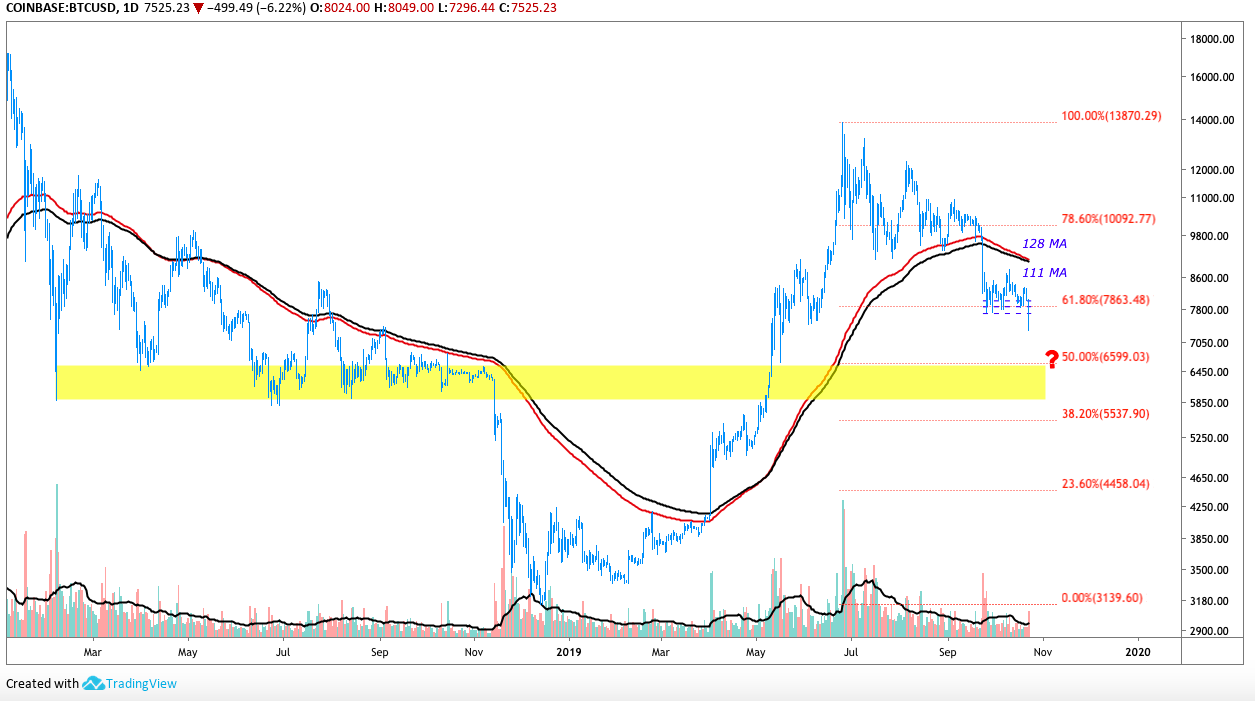 Prior to the break, the Moving Average Convergence Divergence (MACD) indicator was trending upward on the daily time frame whereas Bitcoin price had descended since Oct. 11.

One could also argue that the head and shoulders pattern on the daily was completed and repeated failure to break above $8,300 increased the chance that BTC price would take the southern route.

Telltale signs of today’s drop were a tightening range over the past 3 weeks, decreasing volume and a bearish weekly MACD and (Relative Strength Index) RSI.

Day traders will attempt to play both sides of Bitcoin’s interim chop, while swing traders are likely licking their chops and eyeballing the 50% Fibonacci retracement on the weekly time frame as it is this price point that has three things going for it: 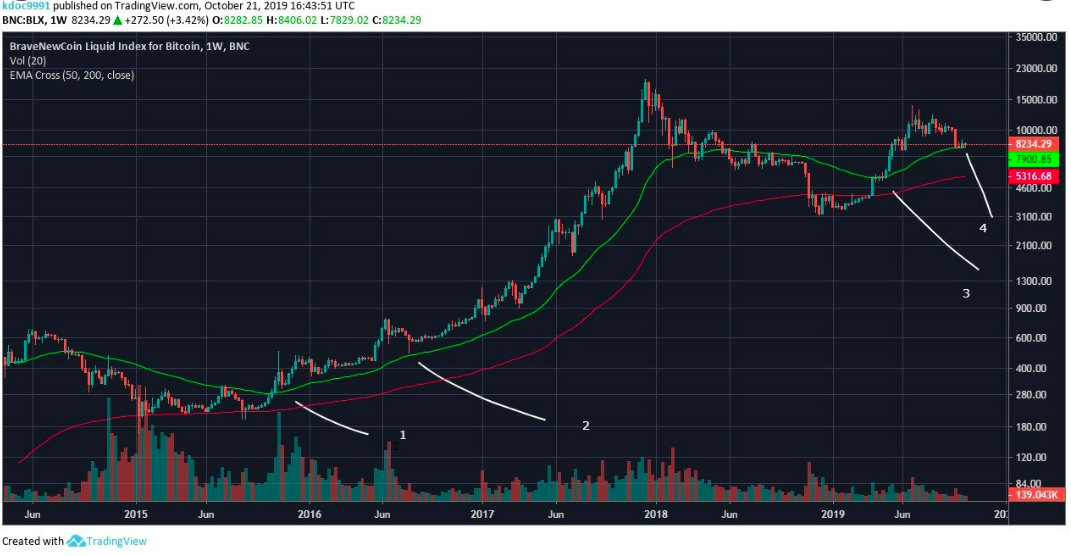 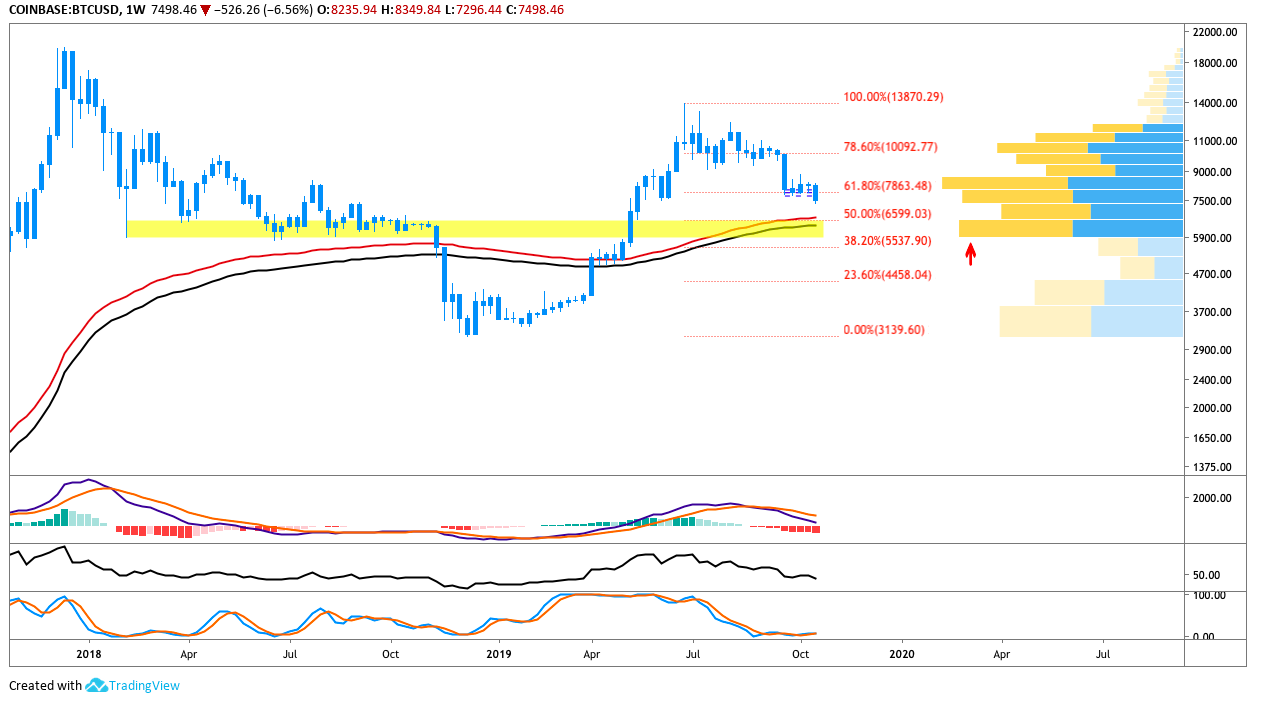 Across multiple time frames Bitcoin appears to be in bear territory but some traders see a silver lining in the current scenario.

For example, veteran trader and crypto analyst Scott Melker hinted that the 4-hour chart appears to suggest a reversal could be in order. Melker identifies a possible bullish divergence taking place on the 4-hour and daily timeframe.

If Bitcoin price can find support at $7,300 to $7,400 after a few 4-hour candle closes, traders may be induced to re-enter long positions. The 4-hour chart also shows that the RSI and Stoch RSI are deeply oversold so an oversold bounce could be in play before the daily candle closes.

Often, BTC price seemingly settles on the 4-hour timeframe before plummeting even harder so traders are advised to approach with caution and wait for further confirmation that a bottom has been reached before making their move.

The views and opinions expressed here are solely those of the author (@HorusHughes) and do not necessarily reflect the views of Cointelegraph. Every investment and trading move involves risk. You should conduct your own research when making a decision.

Before Bitcoin was a movement, it was a digital currency. While the…

BitBlockBoom Is Bringing Bitcoiners Back Together